It has been reported that QPR defender Nedum Onuoha would welcome seeing Rio Ferdinand join the newly-promoted side this summer. 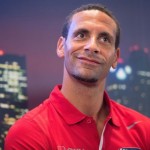 The 35 year old former England international is available as a free agent after being released by Manchester United at the end of the season, but is currently on media duties at the World Cup in Brazil.

“Someone like that – his track record speaks for itself and having played a good few games for Man U this year, and coming from there you would like to think you can pretty much play anywhere,” Onuoha told Get West London.

Adel Taarabt : I Want To Stay With QPR!