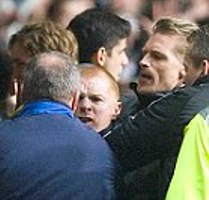 Rangers manager Ally McCoist and Celtic manager Neil Lennon were caught in a brawl after the final whistle of their Scottish Cup clash at Parkhead.

Celtic won the match 1-0 thanks to a Mark Wilson strike in the 48th minute.

The spat between the managers only made things worst and they both will have to wait before finding out the punishment that will be handed down by the SFA.