Reports are out claiming that Crystal Palace boss Neil Warnock fancies their chances against Manchester United this weekend. 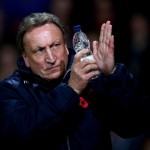 The 65 year old knows that going forward, United are likely to cause Palace problems and he is hoping they have an off-day and the Eagles can come away with something.

“We have got players who can take advantage of any backline,” he said.

“We’re not kidding ourselves though – United have spent around £150m going forward!

“However, I think we can be bold up there. They look like they’ll be inexperienced at the back so we need to put them under as much pressure as we can.

“You have to go anywhere and believe you can win. Everyone needs to be singing from the same hymn sheet and cut out silly errors, like Sunderland’s first goal on Monday.

“I hope our forwards can have a good day and we defend well.”