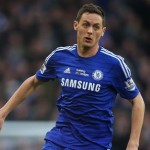 It has been reported that Chelsea are expected to soon confirm a new deal for Nemanja Matic.

The London Evening Standard reported that Matic has been rewarded for his superb form for the club with a £30,000-a-week pay-rise to over £90,000-a-week.

The 26-year-old is set to officially sign the extension to his current deal, which will now take him up to 2020, in the next few days.

He will join Eden Hazard, Oscar, Cesar Azpilicueta and Thibaut Courtois in committing his long-term future. Captain John Terry will also sign on for another year before the end of the season.