Reports are out claiming that Nemanja Matic has no regrets returning to Chelsea after leaving Stamford Bridge three years ago for Benfica. 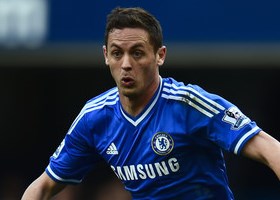 The Serbian told A Bola : “The day my agent offered me the chance to come back to Chelsea, I didn’t hesitate for one second,”.

“You can’t refuse one of the best clubs in the world and the best coach in the world. But my wife and my three-year-old child cried when we left Lisbon.

“But in London I feel really great. I’m also working with a great manager, everybody knows that Jose Mourinho is a fantastic coach. Now I’m training under him every day I just must agree, he really is fantastic.

“But I’m also close to my former boss Jorge Jesus, we are talking regularly. He was my manager and now he is my friend.”

Matic is hopeful that will win their title.

He added: “I believe they will win the title, they are a lot of points ahead of Sporting and Porto. They must continue winning matches and then the party will come.

“I also hope that Chelsea will be able to win the Premier League so I would be champion in two different countries in one season.” Everton In Talks With Chelsea For Demba Ba