Nemanja Vidic insists that Manchester United can retain the Premier League title even if the squad isn’t added to by manager David Moyes. 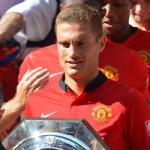 The Manchester United captain says the Premier League champions will be leading contenders to retain the title ahead of Chelsea and Manchester City this season.

The Serbian centre back said: “The league is stronger than last year. A lot of teams have got new singings and it will be very tough to win this year.

“We have three new managers with clubs competing for the trophy, and that’s a good thing in terms of the interest of the fans.

“But I believe we’ll be competing to win the trophy like every year. We’re still a good team, we have some young players coming through, we won the title last season and I think we’ll be getting better and better. It’s made us stronger.

“I’m very pleased with our squad. I think we’re still the strongest team and ready to compete for all trophies. If we get new signings then good but I think we have everything.”