Manchester United defender Nemanja Vidic is confident that the club will bounce back from Sunday’s 4-1 humiliating derby defeat to Manchester City. 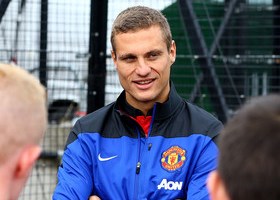 The reigning Premier League champions were hammered by their neighbours at the Etihad Stadium in a result that has produced doubts about David Moyes’ ability as a manager.

However, the 31 year old Serbian centre back says it is normal for people to question both the boss and the players after such a loss and feels the Old Trafford outfit will swiftly recoil from the disappointing defeat.

“It is horrible to lose the derby game,” he said.

“It hurts. Trust me, no-one will want to remember this.

“It doesn’t matter whether we are losing or winning you will always go back to that question, is the manager good? Are the players good?

“I am not looking at it that way at all.

“This loss has hurt but the most important thing the new manager and the old manager said was that you have to bounce back and win the next game.

“We cannot be sad and feel sorry for ourselves.”