Manchester United captain Nemanja Vidic has declared that it is the players, not manager David Moyes, who are to blame for this season’s struggles. 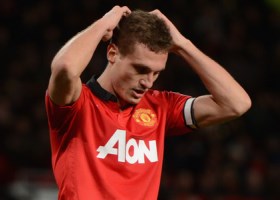 The Serbian centre back refuses to buy into suggestions that United have struggled to cope with the managerial transition following Sir Alex Ferguson’s retirement and Moyes’ appointment.

He said: “We had changed our manager, there was a lot of focus in the media on how we would do, but my expectations at the start of the season were the same. They are the same every year at Manchester United, not just because we had a new manager.

“Those expectations come from the players, the club, the fans as well as the manager. At United there is always a demand to win games and win trophies.

“The manager was very open from the minute he came here. He knew exactly what he wanted to do and achieve. We had some good training sessions and preparation in pre-season.

“But we had a tough start in the Premier League, we didn’t hit that winning run and get our rhythm which would have given us that confidence.

“The manager is a good character. He talks and encourages people. But it’s up to the players too. We are a group and it’s the group’s responsibility to deal with situations. But I didn’t expect it to be this crazy.”