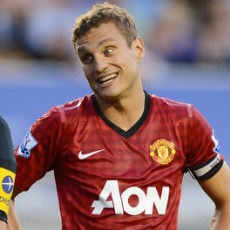 Good news for all Manchester United fans as club captain Nemanja Vidic has returned to training.

The Mirror reported that the 31 year old is back in full training with Manchester United and could return to first-team action within a fortnight.

The former Serbia international centre back has been out of action since late September after undergoing a meniscus operation on the same knee that saw him miss most of last season.

Vidic has experienced no problems or setbacks since he began training with the United first-team squad and has impressed the club’s medical staff with his progress.

The 31-year-old defender was given an initial return date of late November, but Sir Alex Ferguson then revealed he did not expect his captain back until around Christmas. Ferguson : We Know What Louis Saha Is Capable Of