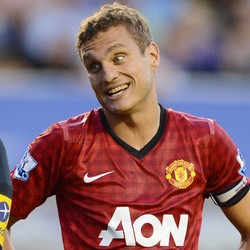 Nemanja Vidic was full of praise for hat-trick hero Robin van Persie after victory at Southampton.

The Manchester United skipper praised Van Persie’s character after the Holland hitman recovered from missing a penalty to score the two late goals in the sensational win at St Mary’s.

“Robin was great,” he told MUTV.

“I think he’s a great player. Even in his first game, he did a good job and this one is amazing with three goals to give us three points, which I think are going to count very much at the end of the season.

“He’s a good penalty taker but it could happen to anyone. It was not a great penalty, I have to say, but, in the end, he managed to score two more so we got the win.”