It has been reported that former Manchester United captain Nemanja Vidic was sent off on his Inter Milan Serie A debut for their 0-0 draw with Torino. 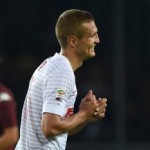 The opening Serie A game ended goalless, but only thanks to Samir Handanovic parrying a Marcelo Larrondo penalty. Vidic was sent off for the incident.

Inter coach Walter Mazzarri said: “As for the Vidic red card, the referee lost the plot. Vidic is used to playing in England, where if a fair foul is given, they applaud the referee and say ‘you got it right.’

“Here Doveri misunderstood the intention and thought it was malicious. It’s absurd.”