Manchester United boss David Moyes has revealed that a new deal is on the agenda for Nemanja Vidic.

The 31 year old centre back’s contract expires in the summer and whilst there was speculation in his homeland earlier in the summer that a new deal was about to be signed, so far it hasn’t happened. 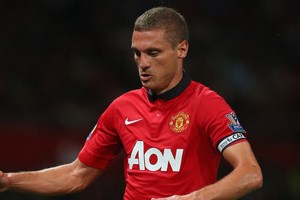 “It is something I have not discussed with the chief executive yet but Vida’s form at the moment would suggest he is well worthy of that,” said Moyes.

“Probably his injuries have been the reason why you might have to look at it, so the big thing is to see how he goes.

“But his form has been very good. We just need to hope he gets through and doesn’t pick up any more injuries.”

“A lot of attention has been taken by the form of Wayne Rooney and Robin van Persie but defensively, we have done really well and Vida has been excellent,” said Moyes.

“Sir Alex is right about keeping Vida fit because he is a top defender.

“I have worked with some really good central defenders. But I have got to say, in the short time I have been here, Vida has been as good as there is.

“He is everything you would want in a centre-half.

“He is tough. He is a great leader in the way he plays. He is aggressive at the right moments.

“I have been really impressed with how good a player he is.”