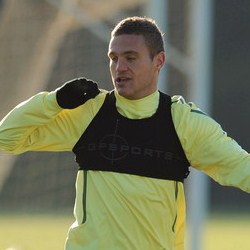 Reports are out claiming that Manchester United captain Nemanja Vidic is set to miss their Champions League clash with Marseille.

The Daily Mail has reported that United have been dealt a hammer blow ahead of their Champions League second leg against Marseille – with captain Vidic almost certainly ruled out by a calf injury.

News that winger Nani is set to complete a remarkable recovery from a badly gashed shin – by playing just four days after he had been ruled out until next month – was almost immediately overshadowed by the bleak update on Vidic.

The Serbia defender only returned from suspension in Saturday’s FA Cup quarter-final against Arsenal, but picked up a knock in the 2-0 win and was unable to train on Monday.