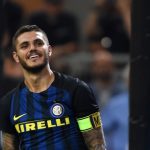 Icardi was linked with a move away over the summer.

Icardi explained to Mediaset : “The club has made great investments this summer, bringing in quality players, and that’s an advantage for me,”.

“I want to win with this shirt, I want to stay here. I’m comfortable in the city and I never thought about leaving this team.”

His wife and agent Wanda calling him “the best number 9 in the world”.

“She wrote that [on Twitter] because she’s my wife, but I’m lacking a lot to be the best striker in the world. There are many better strikers who do amazing things.

“I’ll leave putting labels on me to you [the media], I just have to score goals. I’m the Inter striker, and in football if the strikers aren’t scoring, then they’re not helping.

“It’s my duty and I have to keep doing, and of course to do it against Juve is always nice! Doing it in the Inter shirt is different than doing it for Samp, scoring in the Derby d’Italia is always important and a source of great satisfaction.”