It has been reported that Manchester United legend Gary Neville has questioned the future of Juan Mata. 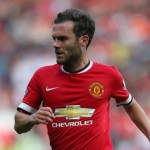 Neville claims that the Spanish international does not do enough on the pitch to command a regular starting position alongside the likes of Angel di Maria and Radamel Falcao.

He told Sky Sports: “He has done well, Mata, when he has played in central areas and his goal-scoring record is good. But I always wondered whether he is going to fit the bill long term at United.

“When I watch him at Old Trafford, he isn’t dynamic enough and with Angel Di Maria in the team, they have to get Radamel Falcao in.”