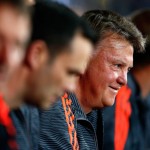 Speaking alongside Ryan Giggs at an event in Manchester for executive United season ticket-holders, Van Gaal was quoted by The Times discussing criticism from Gary Neville and Paul Scholes.

He rejected criticism of United’s recent style of football and results from former players, including Neville and Scholes.

“It makes me sick because they should know that it takes time.”