It has been reported that new Holland coach Guus Hiddink is urging Manchester United striker Robin van Persie to end his feud with Pierre van Hooijdonk. 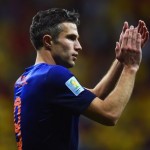 Van Hooijdonk, who won 46 caps for Holland from 1994-2004 and was named in Hiddink’s new coaching team on Friday, slated the former Arsenal striker last month ahead of the World Cup third place play-off clash against hosts Brazil, claiming the player should have been dropped from the team for a lack of commitment.

Hiddink told The Sun: “There’s going to be a discussion between Van Hooijdonk and Van Persie.

“They should sit down together like grown men, bang their heads together and speak their minds as guys should. I plan to schedule a meeting between them soon.

“I’m happy Van Hooijdonk will be working with the under-21s. He’s the type of player up-and-coming youngsters can use as an example.

“There is something from the past between him and me – and everyone who knows me realises that I prefer to deal with secret matters openly.

“We have to sit down like big boys and clear them out of the way. I want to do that soon.

“Van Persie is captain of the team at the moment and I see no reason to change that even though it is too soon for me to say that for definite.”