Reports have emerged claiming that Arsenal midfielder Tomas Rosicky is set for another spell on the sidelines after picking up an injury during his comeback on the weekend. 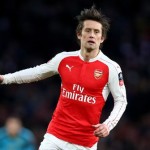 The Czech Republic veteran made his first appearance of the season in Arsenal’s 2-1 FA Cup victory over Burnley on Saturday by entering the game as a substitute in the 71st minute.

Rosicky’s return has been soured though as it has been revealed that the midfielder sustained a thigh injury during the clash and is facing a further four weeks out on the sidelines.

This latest setback has placed even more doubt on Rosicky’s future at the Emirates Stadium as he is only under contract with Arsene Wenger’s side until the end of the season.