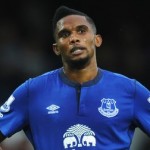 New York Cosmos boss Giovanni Savarese has admitted that his club is interested in Samuel Eto’o.

The Everton striker is being linked with a winter move to Italian club Sampdoria but Savarese suggests the Cosmos are prepared to throw their hat in the ring for his services.

The North American Soccer League side are determined to make a splash in the second tier of US Soccer in 2015 and Savarese says bringing a player such as Eto’o to New York would be a great move for the club that reformed in 2010.

Savarese told Tuttomercatoweb.com : “We respect Everton and Samuel Eto’o has a contract with the English club and it will be they and the player who decide together what his future will be,”.

“As a club, we are interested in a player of that level, for his quality, his determination and his great will to win. He’s a player who, if there were any possibility of getting him, we would be interested in taking.

“It’s going to be a decision that they [Everton and Eto’o] will take together, then we’ll see which club they choose and which will be the best situation for all parties.”

Savarese also spoke of the prospect of seeing former Barcelona and Inter Milan star Eto’o link up with Real Madrid and Schalke great Raul who signed with the Cosmos in October last year.

“It would be a really great thing to see such a partnership,” added Savarese.

“They’ve both done great things and it would be beautiful, but we respect Everton’s wishes and they will decide further down the line if there will be the possibility of selling Eto’o.”

Mikel Arteta Hoping For A Good Reception From Everton Fans