Arsenal legend Thierry Henry played a major part in his side’s single goal victory as the New York Red Bulls overcame the Gunners in a 1-0 win at a packed Red Bull Arena. 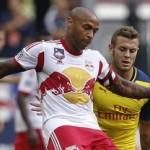 Former Manchester City striker Bradley Wright-Philips continued his rich vein of goalscoring form with a first-half strike which was to be the winner when he met Ibrahim Sekagya’s back post header following a superb corner delivery from Henry.

Arsene Wenger’s side, though nowhere near full strength, were poor throughout the 90 minutes and were second best to the Red Bulls who currently sit in fourth position in the MLS domestic league.

Per Mertesacker Pleased With Match-Winning Goal Against England