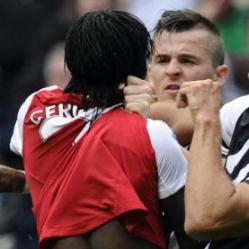 Gervinho’s Arsenal debut ended in disgrace as he was sent off in a goalless Premier League draw at Newcastle United.

With a quarter of an hour left the striker, bought for £12 million from Lille and Arsenal’s only major summer signing so far, was shown a straight red card for a slap on Joey Barton, who had become incensed with the Ivorian after he took a blatant dive in the box.

Barton was hardly blameless – he sparked the confrontation by hauling Gervinho to his feet to remonstrate with him following the dive, and made a meal of what was ultimately light contact – but Arsene Wenger will now have to do without his new man for three games, with a violent conduct charge sure to follow.

It was not the only incident involving Barton, who was certainly the victim earlier in the half when Alex Song escaped with only a yellow card for a nasty stamp on the prostrate Newcastle midfielder that referee Peter Walton missed.

The game itself was somewhat of a non-event: most tellingly Cesc Fabregas and Samir Nasri and were omitted from the Arsenal squad ahead of proposed transfers to Barcelona and Manchester City, while for Toon the talking point was Barton’s presence, an unlikely starter given that two weeks ago he was offered a free transfer and slapped with a fine following a series of rogue tweets.