Reports have emerged claiming that Newcastle United aim to land QPR striker Charlie Austin in January for a bargain price. 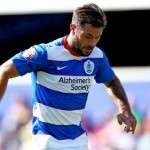 The Telegraph reported that Newcastle will make a cut-price £6m bid for Austin in January.

Austin is out of contract next summer.

However, he striker stayed at Loftus Road last month despite Rangers’ relegation from the Premier League because nobody was willing to match the £15m valuation that the Londoners had placed on him.