Reports have emerged claiming that Newcastle United manager Alan Pardew is close to landing the Crystal Palace job according to reports. 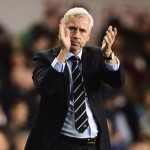 The Eagles sacked Warnock on Saturday in the wake of the 3-1 Boxing Day loss to Southampton and the rumours are circulating regarding who will become his replacement.

The Shields Gazette reported that Magpies boss Pardew is being heavily backed to return to the club he served as a player between 1991 and 1995.

Additionally, Sky Sports claims that Newcastle and Palace are in ‘advanced talks’ over a compensation deal which would take Pardew to Selhurst Park.

It is also believed that former Stoke City manager Tony Pulis, who stepped down as Palace boss before the start of the season, could in-turn replace Pardew at St James’ Park.