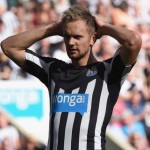 It has been reported that Newcastle United caretaker boss John Carver is wary of rushing back Siem de Jong.

The Magpies have had to do without the 25-year-old Holland international’s invention for the last four and a half months after he tore a thigh muscle just three games into his career on Tyneside following a #6million summer move from Ajax.

Carver said: “Having him, Mehdi Abeid and Sammy Ameobi fit again just adds to the group.

“He seems a huge character, he’s a good talker who pops in every morning for a chat. He’s one of the big characters in the dressing room.

“But we need him fully fit. I think he’s got to have two, maybe three Under-21 games and then maybe 45 minutes, 70 and then a full game. He’s still a little bit off at the moment.”