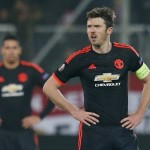 Reports have emerged claiming that Rafa Benitez is believed to be keeping a close eye on Michael Carrick’s contract situation at Manchester United.

According to Goal.com, the Spaniard wants to bring the veteran midfielder to Newcastle United in the summer if he keeps the club in the Premier League and retains the job at St James’ Park.

34-year-old Carrick is out of contract at Old Trafford in June and will be free to leave in a few months’ time if the Red Devils do not deal him in.

Benitez is believed to be showing significant interest in the former Tottenham Hotspur man who has been heavily linked with a big-money move to China in recent times.

Carrick’s United future is in doubt which has alerted the Toon who are looking for experienced Premier League players to get things back on track in 2016/17 if they happen to beat the drop.

Arsenal are also said to be keen on the veteran midfielder.