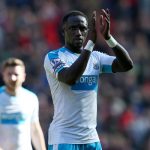 Reports have emerged claiming that Newcastle United have set their price for Moussa Sissoko.

The Sunderland Echo says Newcastle will demand at least £20m for midfielder Sissoko.

The France international, who is in his country’s squad for Euro 2016, does not want to play in the Championship and has admitted his interest in Arsenal.

But Newcastle are reportedly prepared to play hardball, with Rafael Benitez still hopeful he can convince Sissoko to stay. Benitez wants face-to-face talks after Euro 2016.