Reports are out claiming that Newcastle United have opened new contract talks with Rolando Aarons. 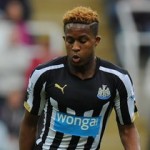 The Evening Chronicle claims that United chiefs are thought to be holding talks over Aarons’ future.

The England U20 international signed his first professional contract only in April but his stock has risen significantly since then and the 19-year-old was linked with Manchester City and Liverpool over the weekend – with both believed to have ran the rule over the teenager.

It is understood that Aarons has one year left of his current contract with the year of an option to follow.