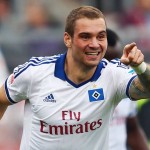 It has been reported that Newcastle United are chasing Hertha Berlin striker Pierre-Michel Lasogga.

The Daily Mail reported that Newcastle have been quoted £10million but the 22 year old is ready to push for the move and they hope that will help drive down the price to around £7.5m.

He scored 13 goals in 20 appearances for Hamburg but he has only one year left on his contract.