It has been reported that Alan Pardew is hoping Newcastle United can soon sort out the future of striker Loic Remy. 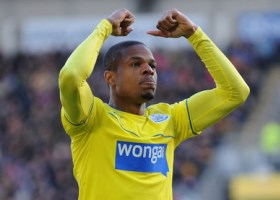 The French international striker has netted 13 Premier League goals while on his season-long loan from QPR and Pardew is determined to bring him to St James’ Park on a permanent basis.

However, it is believed that Arsenal could make a play for Remy in the summer which has prompted fears from the north east outfit.

“We have the Remy situation that we need to resolve one way or the other,” Pardew said.

“That needs to be addressed because we certainly need a player of his quality.”

Reports suggest that the Gunners could look to activate Remy’s £10million release clause this offseason as they look to bring a quality goalscorer to the Emirates Stadium.