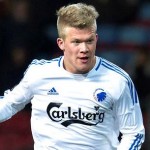 After a disastrous six months at Cardiff City last season, Cornelius has rebuilt his confidence after returning to FCK in January.

Cornelius has bagged eight goals in 17 appearances in the Danish Superliga, where he tops the scoring charts.