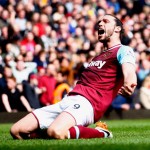 Reports are out claiming that Newcastle United legend Alan Shearer was impressed by Andy Carroll’s hat-trick on Saturday.

Carroll struck a treble in West Ham’s 3-3 draw with Arsenal.

Shearer wrote in the The Sun: “I was as delighted as anyone to see Andy Carroll score his hat-trick against Arsenal.

“But talk of him going to the Euros with England is premature.

“There is no doubt he would offer us a different option.

“I was with him at Newcastle so I know the ability he has — when he gets the right delivery he is unplayable. But we have seen that ability for three or four games in a row before, then he goes and gets injured.”