Reports are out claiming that Newcastle United are interested in Arsenal striker Joel Campbell. 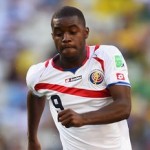 The Daily Star reported that Newcastle boss Alan Pardew was linked with a move for Campbell in the summer, and would being part of a new-look strikeforce that would include Ayoze Perez.

But the Costa Rica international forward has confirmed he plans to be back with Arsenal after the World Cup concludes.

He told reporters: “Of course I have to go back, because I have a contract with Arsenal.”