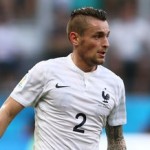 Reports are out claiming that Newcastle United have cooled reports of Mathieu Debuchy moving to Arsenal.

French media reports claimed that the French international will be heading for the Emirates Stadium this summer having also been linked with Paris St Germain and Monaco.

However, the news came as a surprise to sources at the Tyneside club, who told Press Association Sport the claims were at best premature.