It has been reported that Newcastle United are encouraging PSG to make an offer for Yohan Cabaye. 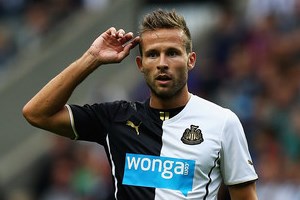 L’Equipe claims that Toon management would prefer to sell Cabaye to PSG ahead of Premier League rivals Arsenal.

PSG coach Laurent Blanc has admitted his admiration for Cabaye, though the French giants are yet to make a bid for the midfielder.