It has been reported that Newcastle United are ready to make an opening offer for Manchester City defender Micah Richards. 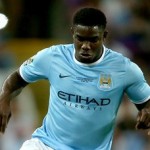 The Daily Star Sunday revealed that the England international defender has only a year remaining on his City contract and would be a bargain signing at £3million.