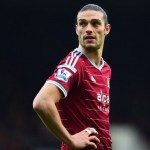 Reports are out claiming that West Ham United will seek a buyer for Andy Carroll this summer.

It is said that Hammers chiefs are unconvinced by the striker’s long-term fitness chances.

The Mail on Sunday says the club’s hierarchy have grown weary of Carroll’s terrible injury record since making him their record singing at £15m 18 months ago following a season’s loan at the club from Liverpool.

Newcastle United, who sold Carroll to Liverpool for £35m, would be willing to take him back but offer as little as £8 million plus appearance bolt ons. Danny Guthrie Happy To Be Back In Action For Newcastle United