It has been reported that Newcastle United are regarded as favourites for Manchester City defender Micah Richards. 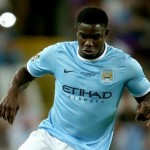 The Daily Star Sunday claims that Richards, who has only a year left on his contract, is likely to move on this summer.

Richards wants to leave for regular first-team action and Newcastle are now leading the chase for the versatile defender who is valued by City at £7million.

Arsenal also have a long-standing interest and fear they could lose their out-of-contract right-back Bacary Sagna to City.