Reports have emerged claiming that Newcastle United are on the verge of completing a deal for MK Dons starlet Dele Alli. 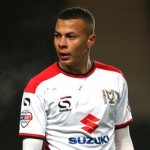 The Daily Mail suggests that the Magpies will secure the signature of the 18-year old midfielder this week for an initial fee of around £4million.

Alli, who has also been linked with Arsenal and Liverpool, will return to the League One side on loan for the remainder of the season after he completes his transfer to St James’ Park.

The England U19 international made his Dons debut in 2012 and has gone on to appear more than 70 times for the Milton Keynes outfit.