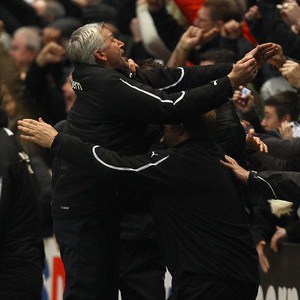 Newcastle produced the story of the season as they came from four goals down at half-time to draw 4-4 with Arsenal in the Premier League at St James’ Park.

A rampant Arsenal destroyed Newcastle inside the opening 45 minutes: they were in front after only 42 seconds thanks to Theo Walcott, while before three minutes were up Johan Djourou had made it two. Robin Van Persie added further strikes in the 10th and 26th minutes.

In the second period Abou Diaby was sent off following an incident with Joey Barton and Kevin Nolan and the game was less open after that with the Gunners seeming content to hold on to their four-goal cushion.

However they were unable to do so, Barton sticking away a pair of penalty kicks either side of a Leon Best finish – and Cheik Tiote dramatically sealed the comeback with a stonking volley from almost 30 yards with three minutes of normal time to play.

The result means Manchester United can move seven points clear of the Gunners should they win early this evening against Wolves – and Arsene Wenger’s side will not have a game in hand at the end of the day.