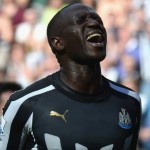 Arsenal manager Arsene Wenger is another apparently keeping tabs on his compatriot and Pardew is bracing himself for a January approach.

“We have not had contact from anybody else or heard from anybody else, but I take the point (he could be a target for others),” said Pardew, who has previously seen France internationals Yohan Cabaye and Mathieu Debuchy use Newcastle as a stepping stone to glamorous moves.

“He is playing for a club where big clubs have come before and taken players away. I understand that so therefore, I guess, he is a player they will be looking at.

“That’s all I can say because he has been terrific for us.”