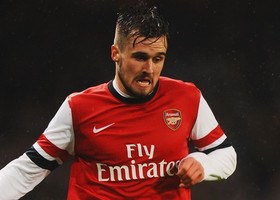 Reports are out claiming that Newcastle United are interested in Arsenal defender Carl Jenkinson.

The London Evening Standard reported that Arsenal’s search for a new right-back could have an impact on the future of Jenkinson, who has made 19 appearances this season but has been the clear second choice behind Bacary Sagna.

Jenkinson is believed to be a target for Newcastle, who would be keen to take the 22-year-old to St James’ Park on a season-long loan deal.