Reports are out claiming that Newcastle United are in pursuit of Ashley Cole. 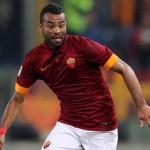 According to the Daily Star, the Magpies are lining up an ambitious move for the 34-year old defender who is currently with Italian club AS Roma.

Cole made just 11 Serie A appearances under Rudi Garcia last season and could be lured away from Rome in order to game regular first team football.

Newcastle boss Steve McClaren is keen on Cole and is pondering a summer offer for the former Arsenal and Chelsea left-back who is under contract with the Giallorossi until next June.