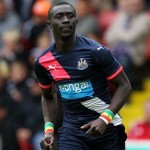 Reports are out claiming that Newcastle United boss Steve McClaren insists Papiss Cisse is not for sale.

The 30-year-old Senegal international was the subject of persistent speculation over the summer and continues to be linked with clubs in the Middle East, where the transfer window does not close until later this month.

McClaren said: “He’s not going anywhere. I came here and there was a lot of debate and talk about Papiss coming or going and whether he would be staying.

“I said to [managing director] Lee Charnley, if you look at his record it’s fantastic. Eleven goals in 22 games [last season] was fantastic and, to be perfectly honest, he was the one who was missed when the team weren’t winning those games.

“He’s a threat. He’s a goalscorer. When you’ve got Papiss in the team you always have a chance of winning games, and I think that’s what he did last season.

“I think Newcastle have a better chance of winning with Papiss in the team. He played the first two games and not the last two, but we hope he comes back ready to prove a point.”