It has been reported that Newcastle boss Steve McClaren has confirmed the Toon have not made a bid for Championship QPR striker Charlie Austin. 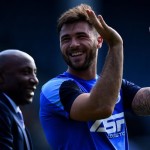 The Magpies are one of a number of clubs to have been linked with the services of the recently-relegated forward, who managed 18 goals in QPR’s doomed bid for survival.

But Newcastle are yet to formally to join them in the hunt.

McClaren told BBC Newcastle: “No we haven’t made a bid. I can say that as a board member.”