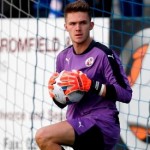 It has been reported that Newcastle United will recall Freddie Woodman from his loan at Crawley Town today.

Newcastle are reeling after it was confirmed No1 Tim Krul faces 6-9 months out after tearing his anterior cruciate ligament.

Newcastle’s Republic of Ireland international keeper, Rob Elliot, is likely to be between the posts against Norwich City on Sunday but Woodman will be promoted to the role of understudy.

United also have youngsters Paul Woolston and Brendan Pearson as cover but both have not tasted any senior action and their experience does not extend beyond the Under-21s.