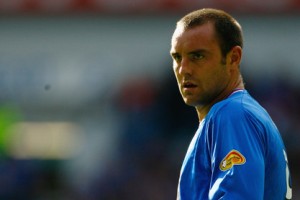 Championship side Newcastle United are reported to be ready to pounce on Rangers striker Kris Boyd.

The league leaders are believed to be keen keen to bring in the former Kilmarnock man in January but will only pursue him if they decide against giving current loanee Marlon Harewood an extension.

Boyd’s Rangers contract expires next summer so the Magpies see it a good time to bring him in but Harewood’s desire for a stay until at least that time may force Chris Hughton to think twice.

Harewood’s agent Phil Sproson said told reporters that Harewood has gradually built on every performance to get stronger and fitter and his confidence is soaring.

He added that Marlon had a slow start at Newcastle due to injury, a shortened pre-season and lack of first team football.

However the agent said that Harewood would like to stay at Newcastle until the summer at least.