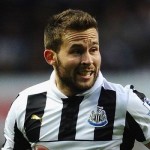 NEWCASTLE United will demand £25m for Yohan Cabaye if Paris St Germain follow up their initial interest in the midfielder.

The Magpies are braced for a bid from the French giants in the next couple of weeks for one of their most prized assets.

And while new director of football Joe Kinnear has said the club aren’t looking to sell Cabaye, it hasn’t put off cash-rich PSG.

Blanc is a big fan of Cabaye, and made him an integral part of the national team when he was in charge.

And reports in France claim PSG are planning an £18m offer for the midfielder, who appears to be unsettled on Tyneside, but that will fall way short of Newcastle’s valuation of the former Lille man if they do decide to sell.