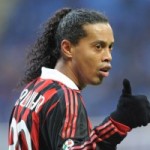 now this is just over the top even for Mike Ashley’s standards.AC Milan superstar Ronaldinho is eyeing a career swansong in England and newly promoted Newcastle are trying to make that happen.

The Daily Mail says Flamengo are keen to strike a deal for the two-time World Player of the Year, but the 30-year-old is understood to be keen for one more challenge in Europe before returning home.

Ronaldinho has twice before been close to moves to England and still harbours a desire to play the Barclays Premier League, according to sources in Italy.

Manchester United were outbid by Barcelona when the forward left Paris Saint-Germain in 2003, while Manchester City missed out when Barca off-loaded him to Milan two years ago.

Chelsea were also keen on a mega-deal for Ronaldinho in 2007, but are unlikely to renew their interest in a player who has declined dramatically since being considered peerless just five years ago.

Ronaldinho’s representatives have courted serious interest from newly-promoted Newcastle United in the past.