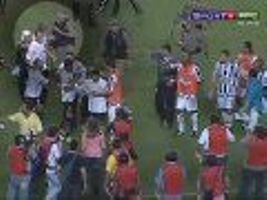 Sensational news are out and it has been revealed that a row involving Brazil teenager Neymar at Santos’ match with Ceara on Sunday developed into a mass brawl in which team mate Marquinhos was struck in the ribs, allegedly by a policeman.

After the final whistle in Santos’ 2-1 defeat at Ceara’s Castelao ground in the Brazilian championship, Neymar became embroiled in an argument with home defender Joao Marcos, who had subjected him to some rough marking.

Players from both sides began fighting and police came onto the pitch to break them up with television replays showing Marquinhos being pushed by a policeman.

Marquinhos said the policeman hit him in the ribs with his truncheon although this was not visible in the replays. Television did show the policeman running away from the pitch.

“I was pulling Neymar (away from the fighting) and the cop gave it to me with his truncheon in my ribs,” Marquinhos told reporters. “The police commander, who was nearby, saw that I was hit, as well as a reporter. Here’s the mark in my ribs,” he said indicating what appeared to be a bruise.

Santos, who won the Paulista championship and Copa Brasil earlier in the season playing a scintillating style, have recently gone off the boil and are sixth in the standings with 31 points, 10 behind leaders Fluminense