It has been reported that former Real Madrid and Barcelona striker Ronaldo is delighted with the form of Neymar at the Nou Camp. 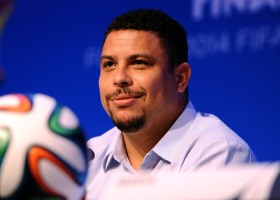 The former striker said : “Nowadays, playing at Barcelona, he is kind of Messi’s assistant, but I think he’s got a lot going for him and is our great hope,”.

“For me, the Brazilian that will be a big name in 2014 is Neymar. He has already shown his qualities in Brazil.”